KARACHI: Torrential rains once again lashed Karachi on Friday, turning the city’s roads and streets into canals and streams and leading to immediate power outage in numerous neighbourhoods, reports indicated. 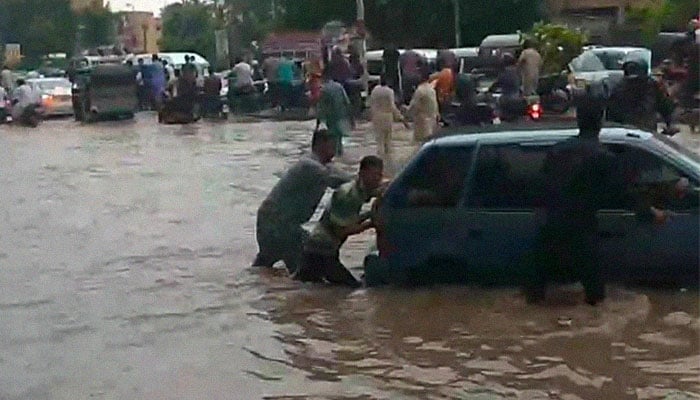 On the other hand, there were traffic jams on numerous thoroughfares in the city, including Shahrah-e-Faisal, Johar Morr, Saddar, I.I. Chundrigar Raod, Denso Hall, Zainab Market, and M.A. Jinnah Road.

Furthermore, reports noted that trees near the Karachi Press Club (KPC) got uprooted and fell on nearby vehicles.

Situation in the Airport police station’s surroundings worsened due to at least 1.5-foot deep rain water on the roads, including Drigh Road, with traffic coming to a halt. Officials under the leadership of superintendent of traffic police (SP) have employed large pumps to drain the stagnating water.

Was there forecast for a minor cyclone in Karachi for this afternoon?? pic.twitter.com/tdASfekijv

More than a week ago, 15 people — including a child — had died of electrocutionas light rain continued to pound many areas of the metropolis.

Power supply was cut off in multiple areas due to the rain under the influence of a monsoon system, health officials and volunteers of rescue services said.

As usual, many low-lying areas and roads had been inundated with rainwater and sewage after gutters overflowed following the rain, with residents facing extreme difficulties in reaching their destinations. 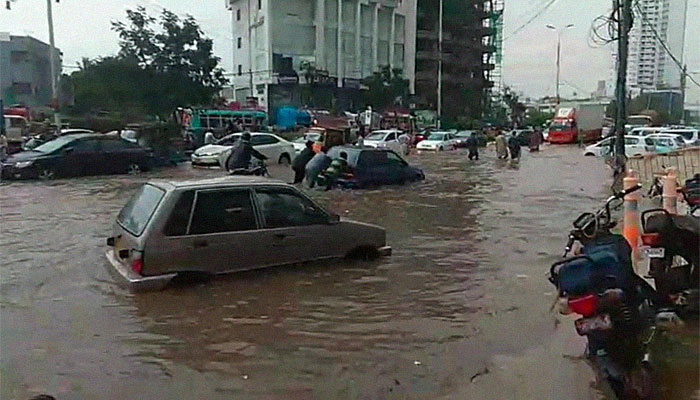 The Sindh energy department has established a special rain emergency cell to provide emergency information about incidents of electrocution in the province during the current season of monsoon.

In this regard, Sindh Energy Minister Imtiaz Ahmed Shaikh had on July 8 contacted the K-Electric’s chief executive officer, secretary for the federal power division, and the National Electric Power Regulatory Authority (NEPRA) chairperson, urging them to immediately fix responsibility of the incidents of electrocution across the province.

At that time, the metropolis’ sole power supplying company, the K-Electric, had said it had already taken significant steps to improve its distribution network ahead of the predicted torrential rains in the city.

A spokesperson for the K-Electric said protecting human lives was “a top priority” for the company and advised people to stay away from utility poles and broken wires in the rainy season.

Among the “commendable” steps it took to improve its system were geo-tagging of high- and low-tension (HT and LT) poles, earthing, and grounding. “The K-Electric continuously remained active against the kunda [illegal electricity connections] mafia, as well as illegal Internet and TV cables on its poles,” the spokesperson added.

“We hope that the city government and related institutions will drain rain water immediately,” the K-Electric representative noted. “The K-Electric’s mobile teams are always busy in timely assistance for power-related issues.”